Almost everyone who sees Bo tells me he looks like me.  I guess I can see the odd resemblance every once in a while, but it’s hard for me to see how my 8.5-month-old boy can look much like a 36-year-old woman.

My three-year-old son, on the other hand, is the spitting image of his father.  He looks absolutely nothing like me.

As I was flipping through a pile of old photographs that my mom had given me, I came across one of my baby pictures from when I was approximately Bo’s age.  Now I can see what everyone is talking about.  What do you think?

So, we’re a little late to the party, but my son is suddenly obsessed with Frozen.    My mom bought him the DVD earlier in the year and he had watched it a couple of times but didn’t seem too excited about it.  Now, all of a sudden, he’s totally into it.

I think they must listen to the soundtrack at daycare because it appears that he knows the words to all the songs.His favourite part is the short little scene he calls “ice cutters” where the men are cutting through the ice and singing Frozen Heart.  I could barely make out the words they were saying, but he seemed to catch them all.  I’ll catch him mumbling “…stronger than a hundred men!” while he’s busy playing.

When it snowed here the other night, he told me that Elsa did it.  “Not Anna, mommy.  Elsa.”

I’ve never actually watched the whole thing.  I’ve seen bits of it but Littleman mainly watches it in the car while we’re driving to the farm.  So, I’ve heard the whole movie, but not seen it.  I finally bought the soundtrack for him so we can listen to the music together.  I have to admit, some of the songs are a bit catchy and I find myself singing along.  Unfortunately, I don’t have the same high-pitched voice that my son has, so I’m butchering the songs pretty nicely.

Anyway, it will be interesting to see how long this movie holds the top spot for Littleman.  Cars was a favourite for a long time.  At least this is better than a lot of the terribly annoying kids shows/movies that he could be asking to watch… Max and Ruby, anyone?

Somehow time is moving way too fast for me these days and I feel like I can’t do everything I want to do.  Somehow, it’s suddenly winter and there is snow swirling around outside right now.  Somehow, my baby is already 8.5 months old and the end of my maternity leave is approaching faster than I’d like.  I’m definitely starting to feel some anxiety these days and I know I need to find a way to work through it so that I can enjoy the little bit of time I have left at home with my little one.

But, for now, a bullet point update:

That’s the main stuff for now.  Heading into the office for a visit and to meet my new boss today.  I’m sure that’s adding to my anxiety.  Visiting months ago was fun.  That was when my return to work was ages away.  Now, it feels too soon.  Ugh.

Stalling.  Negotiating.  Talking back.  Meltdowns.  Anyone who thinks the “terrible twos” are hard has, likely, never parented a three-year-old.

Littleman never really did the stereotypical two-year-old things: fist-pounding, flailing-on-the-ground, crying-and-screaming tantrums.  Sure, he cried and yelled sometimes, but not to the extent that I expected after hearing about the “terrible twos” my whole life.  I’ve started to wonder if, in fact, the whole thing is a bit of a myth.  Because in my experience, having a three-year-old is much, much harder.  These are some of the reasons why:

Luckily, Littleman is nearing the end of his “threenage” year and, it seems that the craziness is slowing down a bit.  Yes,  there are still times like this morning, but they are happening less and less.  I’m sure the age of four will bring with it a whole new parenting challenge.  Hopefully the lessons I’ve learned from managing my three-year-old will help prepare me for whatever comes next!

About five-and-a-half years ago, I tossed out my birth control pills as we prepared to begin trying to start a family.  It took longer than expected to conceive our first son and, knowing that it could take a while again, I didn’t go back on birth control between pregnancies.  After a miscarriage and then another successful pregnancy, we are pretty certain that our family is now complete.

At my eight-weeks-postpartum check-up (way back in May!), my OB asked me what my birth control plans were.  He went through all the options and recommended Mirena (an intrauterine system).  I accepted the prescription from him, figuring I’d think about and talk to my husband and then make the appointment to get it inserted.

While we don’t intend to have any more children, I still don’t feel 100% ready to make a permanent commitment to being finished.  D is a little more certain (OK, a lot more certain).  We both agree, though, that having another child just doesn’t make sense for us financially.  Daycare is expensive.  Our house is too small.  If we were to win the lottery, then, sure, we’d likely have a larger family.  But, given our current situation, our family of four is just right.

So, that leaves us needing birth control.  I’m still breastfeeding and my period hasn’t returned, although I know that doesn’t mean I can’t get pregnant.  We’ve been using condoms since Bo was born, but that’s not our favourite solution.  I really don’t want to go on the pill again, after being off it for so long.  Plus, after two kids, my memory isn’t what it used to be.  I don’t love the idea of having to remember to take it everyday (something I was excellent at before having kids!)

I had coffee with a friend this week who is having her second baby by a scheduled c-section a few days from now.  She’s trying to decide if she should get her tubes tied at the same time.  That wasn’t an option for me, having a vaginal delivery, but it made me wonder what I would have chosen to do if I was in her situation.

We’ve talked about D having a vasectomy and it is something we’ll probably look at more seriously in the future but, for now, I bit the bullet and called the OB.  I scheduled an appointment to have the Mirena inserted.  I have an appointment for January.  When the receptionist was booking the appointment, she told me that I’ll need to take a pregnancy test the morning of my appointment to ensure I’m not pregnant.  Just the thought of that makes me feel strange.  I’ve never taken a pregnancy test hoping it would be negative.

For many reasons, I know that I’ll need that test to be negative. But, I also know that a little part of me will feel disappointed to see only one line.

Another month has passed and Bo seems more and more grown-up each day.

People comment all the time about how happy Bo is.  It’s quite amazing, really.  He’s just a really good-natured little man.

Now that he’s sitting up without any support, he’s even happier.  We have lots of fun playing together on the floor and I love when he laughs at me.  Of course, he laughs even harder at his brother and dad!  I have a feeling the three men in my life are really going to have fun together as the boys get older.

Bo’s getting chattier too!  He babbles and especially enjoys when you mimic his sounds.  Sometimes we end up laughing hysterically after having a “conversation” of babble.

Napping is still going really well.  His morning nap is almost always 1.5 hours or a little longer.  The afternoon nap is often a bit shorter and depends a lot on what we’ve done in between naps and how long I’ve kept him awake (i.e. too long awake = shittier nap!)

Nighttime sleep is hit and miss.  Typically, Bo wakes twice per night to nurse.  If I’m lucky (or if I decide to dream feed) then I can squeeze in one of the feeds before I go to sleep.  Then, he sometimes only wakes one more time.  I know that I could sleep train him at this point and that he probably doesn’t actually need to wake to eat in the night, but, for the most part, it doesn’t bother me.  Sure, I’m tired.  But at least he eats quickly and goes back to sleep without any trouble.  So I don’t really mind the extra time and cuddles with him.  (Ask me if I feel the same way in a few months when I’m back at work!)

Better!!  So much better!  Finally, the kid actually opens his mouth when a spoon comes near it (sometimes) and meals aren’t nearly as stressful as they were with his older brother.

Aside from a variety of purees, this baby loves cheese (extra old cheddar, obviously), toast (dry and cut into strips), scrambled eggs and O cereal.  He’s tried rainbow trout (loved) and pork tenderloin (not as much).  He gags much less often now and is getting pretty good at putting things in his mouth himself.

I’ve noticed that a lot of babies Bo’s age are crawling now.  He’s not crawling yet, but he pushes himself backwards or pivots around if you place him on his front.  He also manages to scoot forward when he’s sitting on his bum.

The biggest change this month was the appearance of his first two teeth!  The bottom front teeth popped through his gums earlier this week and they sure are sharp!  When he opens up his mouth and dives towards my nipple to nurse, I have a brief moment of fear.  Luckily, he’s only nipped at me once since the teeth arrived. 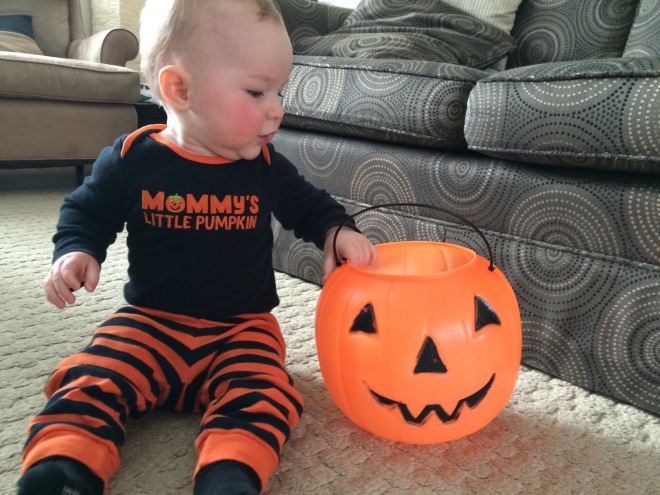 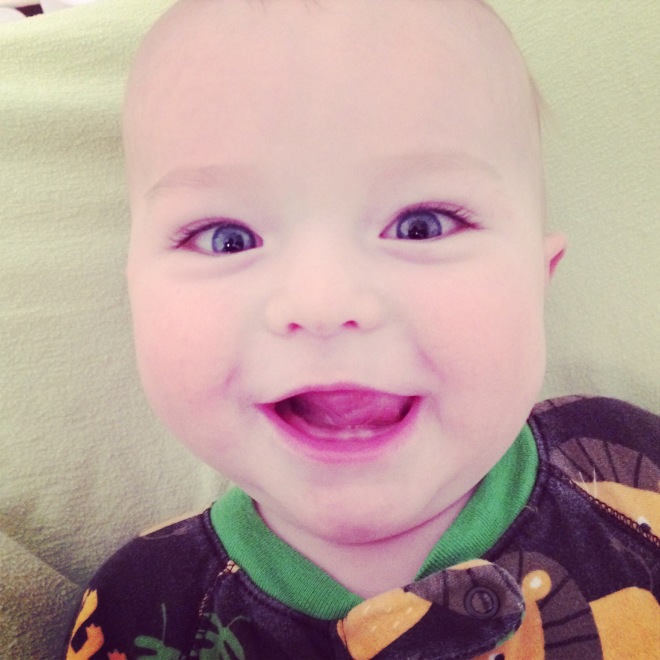 Another milestone reached over here today.  This morning, Bo and I were playing on the floor.  He grabbed my hand and jammed it in his mouth – his usual way to ease his sore gums.  But this time, when he chomped down, I felt a prick!  His first tooth has officially arrived!  I guess that explains why he was up every two hours last night.

Although he didn’t sleep well and he’s been Drooly McSlobberton lately, he hasn’t been too grumpy about teething.  In fact, he continues to smile his great big grin, which is now extra-cute with that little bottom tooth popping out!

No, the teething really hasn’t been too bad.  But, you what isn’t too fun?  The time change.  I remember loving the “fall back” time change as a teenager and prior to having kids.  There was nothing better than an extra hour of sleep on the weekend.  However, it turns out that my kids never got that memo.  To them, the time change meant that there was an extra hour during the day instead.  Which meant that they were up earlier.  And that they stayed awake longer.  And that they were way more tired.  Yesterday AND today.  Let’s hope we can get back on track tonight…